Inside the mind of the creator of Planet H, The Marvellous Marble Factory and more.

She blanketed one of the stories in terracotta clay that rose and dipped into towers and ridges. She timed a miniature metallic-copper train to loop in and out of tunnels. Ms. Lee was inspired by the astronauts’ similar resourcefulness in the film “Apollo 13” (they assembled a carbon dioxide–recycling machine with spacecraft parts).

From Planet H, visitors traverse up a mylar staircase to the futuristic Habitat H, interacting with faux machinery amidst plants that laud the host city’s own penchant for nature and innovation. The experience spills to the street through artful shop window displays, a dynamic façade graphic, and an interactive feature that lights up stars and planets. 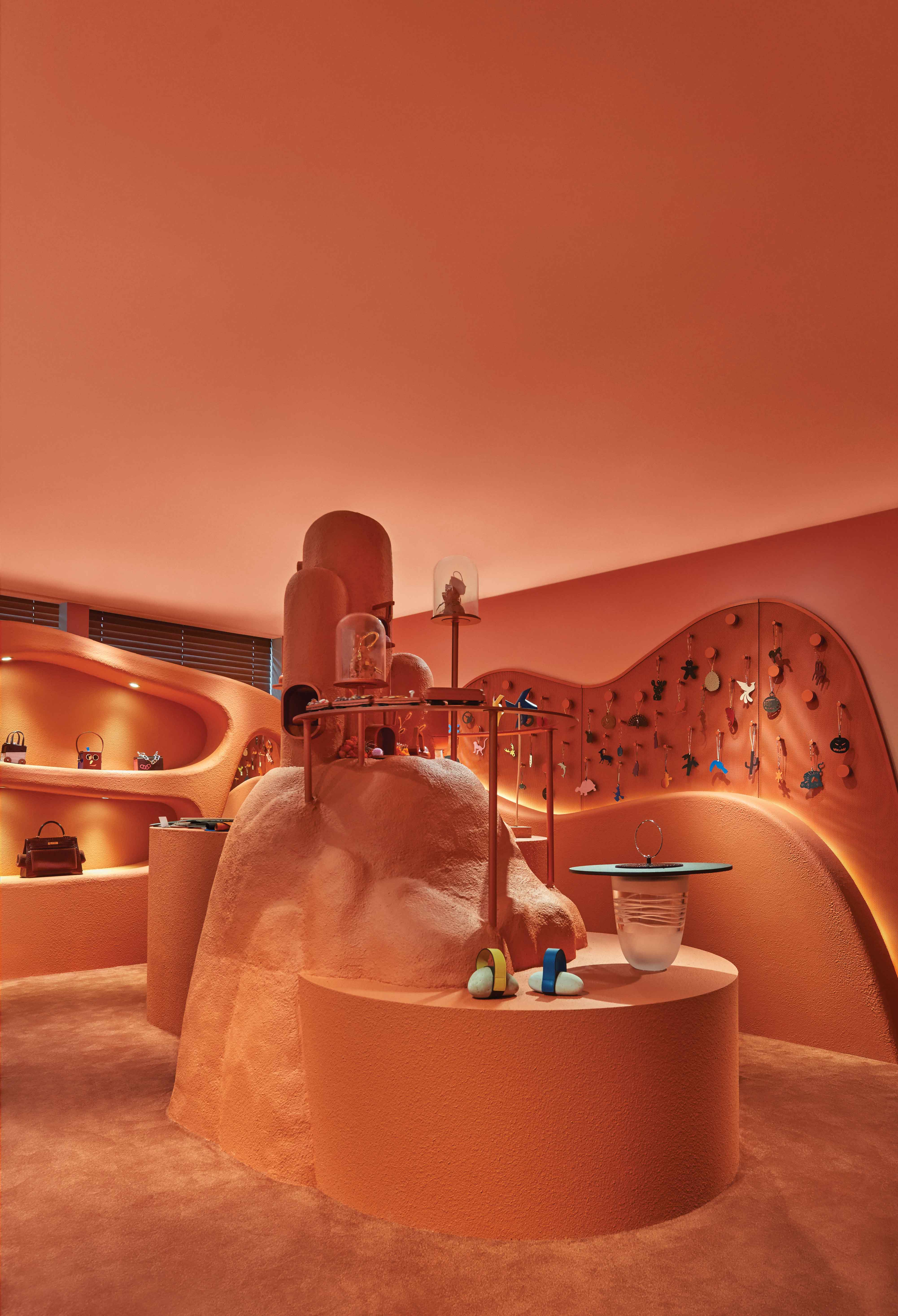 This installation could well represent the inside of Ms. Lee’s mind. Her Alice in Wonderland–type encounters use storytelling and games to get her points across, and the joyful responses they generate echo the fun she has making them.

Lotus leaves frozen in the Float resin table for Industry+ give to mesmerizing light play. The gnarled and the gleaming juxtapose in a wabi sabi moment for her “30 LifeStories – Remembering Parks” Struck bench.

For Bynd Artisan, coin banks and clutches masquerade as leather-bound tomes, and the pastel, brassy objects in The Athena Collection are technologically useful without being high-tech. In Ms. Lee’s hands, the everyday — materials, messages and memories — become more beautiful. 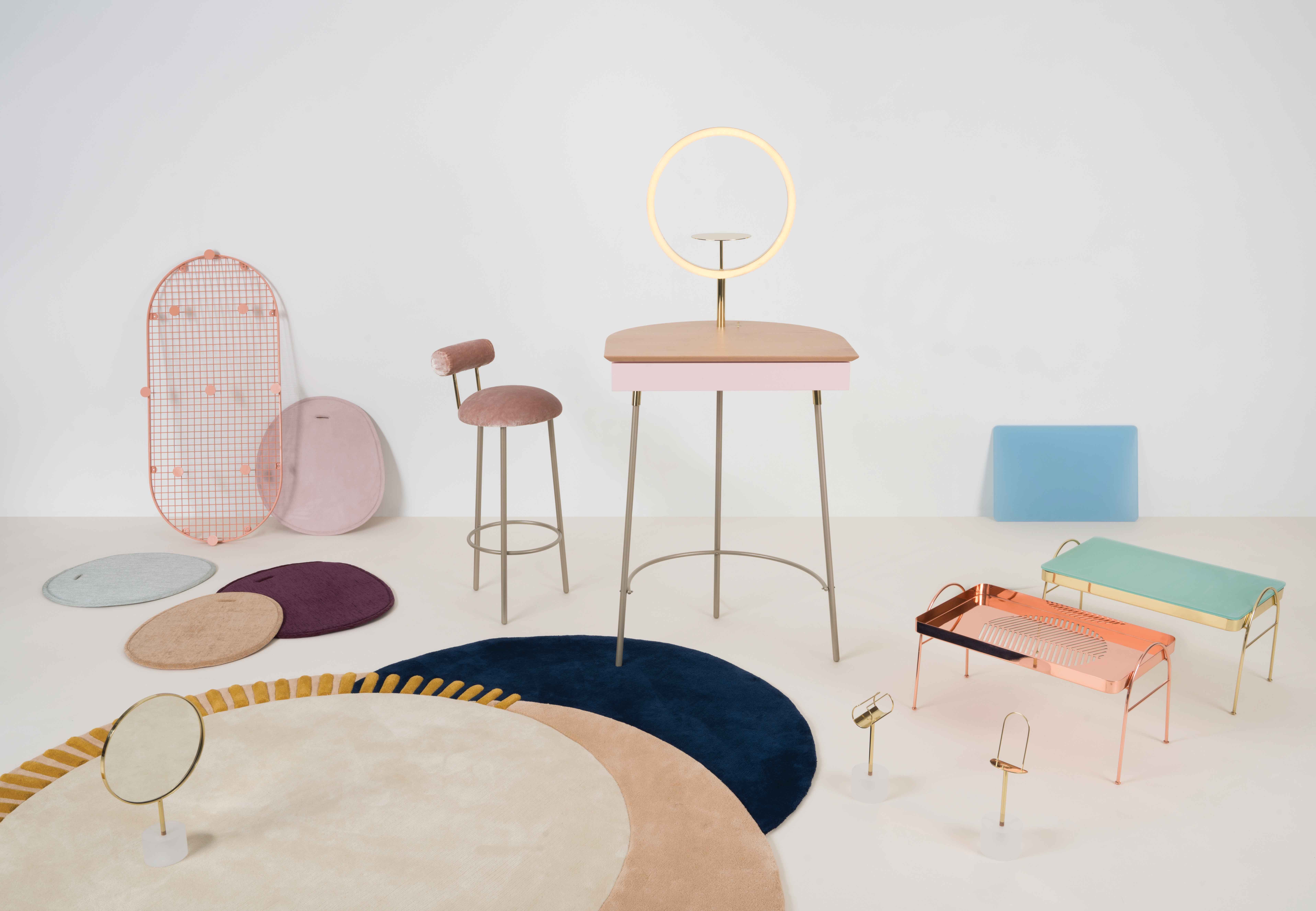 This disposition reflects her works, which are as whimsical as they are relevant, and as aesthetically inclined as they are technically refined. I ask her about her approach of slow reveal.

“There’s a bit of mischief in what I do,” she chuckles. “I think in design, you need to have a sense of fun, play and humor. Thinking about a [project’s] experience is like planning a party — how do I build in thoughtful touch points with a surprise at the end?”

For Ms. Lee, play is serious business. “I find that when you talk about qualities like happiness, beauty or wonder in design, people immediately write them off as superficial. But I firmly disagree. I think we need a greater sense of wonder in our buy-and-throw-away culture. It allows us to have greater appreciation for our objects,” she ruminates. Furthermore, when people come to the message on their own, in a fun way, they’re most likely to remember it. The word “wonder” pops into her projects, like a reminder of this manifesto. There is the Museum of Wonder — an Hermès shop window display whose jocular, absurdist mise en scène snapshots Ms. Lee’s version of industrialization — and The Wonder Facility, her studio-cum-coworking office welcoming like minds.

An admirable lexicon running the gamut of Greek mythology, history and science backs her visions. She’s not just a romantic; she’s also a geek.

Ms. Lee smiles in admission. During school holidays, she was equally content accomplishing tasks for the Science Centre’s Young Scientist Badge program and plowing through books on all topics.

She joined the science club, arts club, computer club, drama club and choir, and helped with the school magazine. Such diverse interests resulted in fluctuating vocational goals, unlike classmates with ambitions clearly in hard-nosed or liberal arts professions.

In industrial design she found her salvation. “It felt right for me because I feel disciplines don’t belong in silos,” says Ms. Lee, whose childhood dreams of becoming a businesswoman — she experimented with imaginary company logos — represented an interest in not just how things are made but also sold.

While Ms. Lee’s commercial artist parents did not overtly promote design, they did provide a nurturing framework. Ms. Lee had access to their design books and magazines, and art supplies such as cow gum, set squares and spray mounts were not out of bounds.

“When I was a child, seeing projects just emerge around the house set up this can-do spirit,” she shares. Ample playground time after school with neighbors also benefited her. “The make-belief, unstructured play is a very design mindset; you need to take what is available to you, and then create your own rules and find the game within that,” she espouses. A coin bank with a book jacket "Book of Dreams"

At the National University of Singapore’s Division of Industrial Design, she happily supplemented design classes with cross- faculty modules in astrophysics and film. But in her third year, she transferred to London’s Central Saint Martins on a Design Singapore Council scholarship, upon advice of mentors who told her that to be a good designer, she had to see the world.

Central Saint Martins’ variegated design disciplines supplied depth of design knowledge, but the city proved to be the hidden school: She patronized its countless museums and exhibitions, and traveled nearby to explore the Milan Furniture Fair and Paris’ Nuit Blanche.

“It’s like a smorgasbord of experiences and influences, which was formidable in shaping my early twenties and forming my creative identity,” she says. There she thrived, graduating with First Class Honours.

Fame came early with her thesis project, a trio of Limited Edition Dolls (Zaha Hadid, Karim Rashid, Jaime Hayon) as a tongue-in-cheek observation of the cult of design. It was widely featured and earned her a guest illustrator opportunity for international design magazine Icon.

For Ms. Lee, stepping out of her comfort zone aids creative growth. After working for London-based designer Sebastian Bergne, she joined the Singapore Economic Development Board, employing design thinking to help grow the consumer-facing business sectors.

In 2013, she took a leap of faith, establishing her eponymous studio. It was the right move, allowing her to explore multifarious avenues including furniture design, scenography and brand communications that fed her restless nature and consolidated her brand.

What delights her most is how she is able to continue doing what she enjoyed as a child, albeit on a different scale.

“I realized that scenography and comic book-design are similar; the windows are like sequences of comic panels. A large part of it is actually storytelling and how to compose a scene to tell a story very quickly,” she explains. 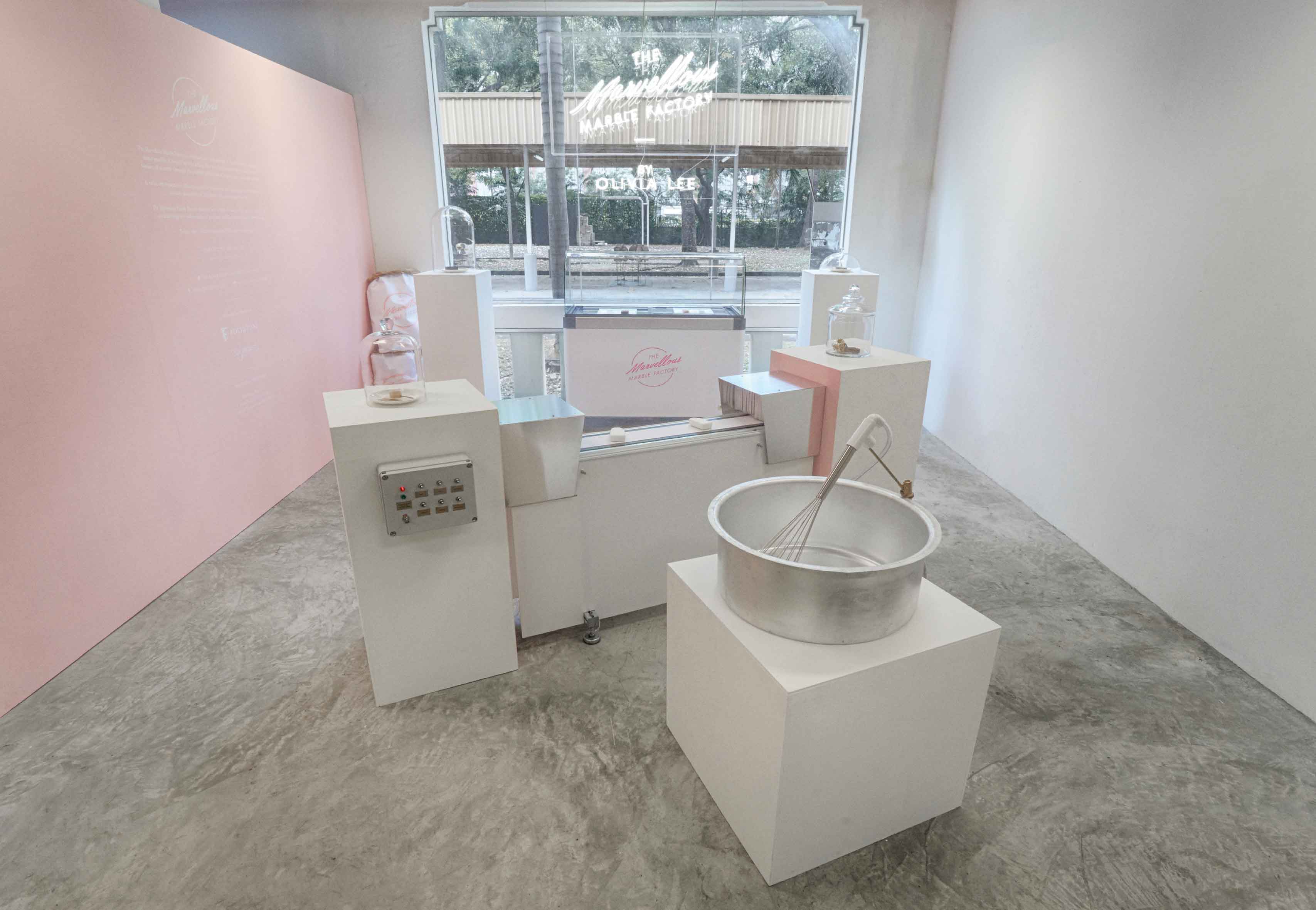 Her fascination with machinery and processes found their way into projects for Hermès and The Marvellous Marble Factory for SingaPlural 2015; the latter had her serving up confectionery imitations made from natural stone on a conveyor belt.

Ms. Lee highlights Rube Goldberg’s illustrations of fantastical contraptions she discovered behind a cereal box as a child. “I think, in a way, I still want to be that inventor,” she muses.

“I really love that kind of absurdity and humor. I would take apart and reassemble Lego and Meccano sets, aspiring to make these machines.” As a designer, she’s able to do just that, inventing for clients such as Bank of Singapore, Samsung and The Balvenie.

Moving on, perhaps, a hotel, the interior of a spaceship or an entirely new vision to address pertinent issues such as sustainability? How these would look through Ms. Lee’s wild and witty lens is something I can’t wait to explore. How the lockdown had us missing the fifth basic human sense.

A Blending of Elements

A Blending of Elements

Bringing fresh creative inputs and sharp problem-solving together is pushing multi-disciplinary design practice Sujonohun ahead of the pack.