The Secrets to Success of a 224-Year-Old Knitwear Brand

The lasting legacy of Johnstons of Elgin, known for their fine wool and cashmere knitwear

London, 1st May 1851 saw the opening of the Great Exhibition of the Works of Industry of all Nations. This not so pithily named gathering was the pet project of Queen Victoria’s consort, Prince Albert, and saw thousands of industrialists, designers, merchants, and landed gentry descend on London. Indeed, the capital flooded with visitors from across the country and the wider British Empire.

They met at the purpose built ‘Crystal Palace’, an enormous, glass topped structure which spanned much of the southern side of Hyde Park. Such was the height of the barrel-vaulted roof that entire trees were enclosed by the newfangled edifice that rose out of quiet parkland in mere months. As charming as this indoor forestry was, however, the trees housed families of sparrows who darted about the great expanse of the building, disrupting construction works. Workmen were equipped with rattles and walked the length of the hall towards the exit to vacate the birds. Not particularly impressed by the eviction plans, the sparrows promptly flew back over the heads of the workmen, further down into the structure.

The embarrassment caused by the hall’s winged residents apparently reached Her Majesty the Queen who tasked the Duke of Wellington with devising a solution. His Grace purportedly suggested introducing sparrowhawks to dispatch with the smaller birds. Whether this then led to the calling in of even larger birds to get rid of the sparrowhawks themselves is unknown, but the imagery of the thought is no less enjoyable. What became known as the Great Exhibition of 1851 lasted from May to October, opening each day save for Sundays (this was Victorian Britain, after all). It was attended by a third of Great Britain’s population at the time and by no fewer than 14,000 exhibitors who pitched an unimaginably diverse range of wares. Samuel Colt demonstrated prototype revolvers; grain merchants brought samples of oats and barley in the hope of courting brewers into placing large orders; even medical apparatus were shown and sold. The official catalog ran to hundreds of pages in length with impossibly concise and formal entries for each exhibitor. At no. 274 of the Woolen & Worsted Fabrics section was James Johnston of Elgin, Scotland. Mr. Johnston, representing his father’s woolen mill which was founded in 1797, brought to town ‘plaids, made of undyed or natural brown wool. Natural brown tweed, of different wools, waterproofed.’

Whilst Johnstons of Elgin had a local reputation for quality sheepswool garments, it competed in a crowded market and needed a genuine breakthrough to get ahead. Having procured its first ever bale of cashmere from a London merchant the year of the exhibition, Johnstons were pioneering the weaving of increasingly exotic fibres sourced from barely explored parts of the world. At the Great Exhibition, Mr. Johnston was especially eager to show off their work with wool from the vicuna, the wild ancestor of the alpaca and dweller of the alpine peaks of the Andes. He had little to fear; Johnstons of Elgin were awarded an exhibitor’s medal for “Superb Vicuna Shawls” and left town with a leather-bound book full of orders.

How a sleepy Scottish tweedmill found itself at the forefront of textile development and, indeed, as an emerging fashion brand in its own right, is a curious tale. Moreover, how Johnstons of Elgin managed to survive this day – one of scarce few who were at Crystal Palace in 1851 who are still around – makes for an even better story.

(Related: From fabric to jewelry — the tweed that Chanel made famous) 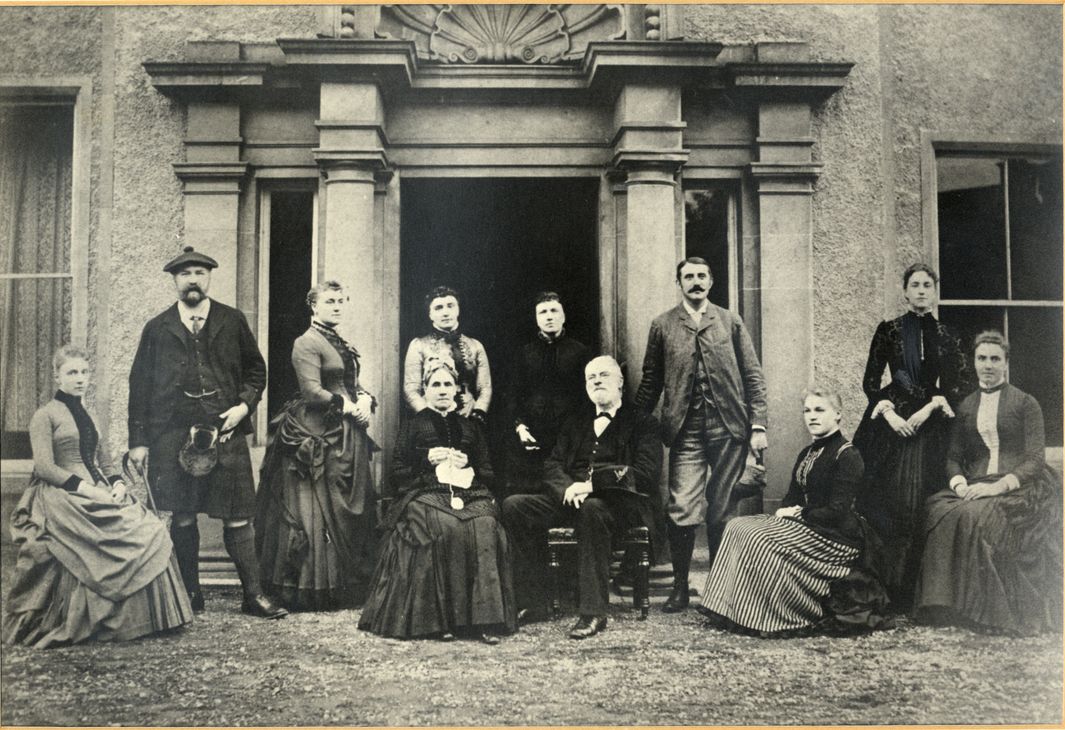 “Continuity”, Johnston’s current chief executive Simon Cotton, tells us. “Since 1797, we’ve been owned by just two families so we have kept pretty grounded.” Indeed, Alexander and James’ descendants held the business wholly until 1904 when Edward Stroud (E.S) Harrison joined as a junior partner. Abundantly energetic and characterised by his workmen as ‘keenly interested in everything’, E.S. was seemingly obsessed with pushing Johnstons forward and keeping luxury fabrics relevant as times changed. As motor vehicles arrived and the world grew smaller, he launched the ‘motor rug’ in the thirties. He presented the same to British Prime Minister Ramsay MacDonald, himself a fellow local Moray boy, a moment no doubt special for E.S. and a reassuring sign that Johnstons found itself in safe hands. Indeed, Johnstons is still in the Harrison family to this day and is likewise still based on its original site by the River Lossie in Elgin. That continuity extends to its small group of craftspeople, many of them in the third generation of their family to work with Johnstons.

“Actually, that was one of the most striking aspects of my induction into the business when I joined [to join as chief executive] seven years ago”, Simon shares. “People would come up to me and proudly introduce themselves as a ‘Johnstons man or woman’. This business is a huge part of who they are and the inverse is just as true; there is no chance we would still be here today without them.”

More remarkably still, Johnstons still produces everything in Scotland. Whilst others exported manufacturing abroad as costs of in-house production rose, Johnstons stubbornly held onto their mills in Elgin and Hawick, in the Scottish borders. And as the only vertical mill in Scotland, everything is done in-house: Dyeing, blending, carding, spinning, winding, weaving - everything.

Moreover, each thread is worked through a rather bizarre looking production line; reassuringly hefty cast-iron carding machines sit alongside ultra-modern automated weaving looms. “Well, some bits of kit do their respective job perfectly well so there is no need to overengineer or replace them”, says Simon. “In fact, wooden and cast iron parts are much more gentle on fine fibres compared to stainless steel so much of the time, the older gear is simply more up to the job.”

Whilst Johnstons have made a seemingly effortless transition from old world purveyors of sporting tweeds to high fashion – one symbolically completed at London Fashion Week 2018, which saw Johnstons’ first launch of a seasonal, luxury fashion collection – their countryside sensibilities remain. Things are still made to last a lifetime and when they grow worn and are past their best, Johnstons can mend them.

Similarly, Johnstons are refreshingly unashamed by their own heritage. Look closely at their logo and you’ll find a bumble bee, a thistle, and an oversized letter ‘J’. In archetypal Johnstons fashion, it has been kept unchanged in absence of any good reason to do otherwise. Depressingly, though, we cannot help but think if this was any other luxury fabric house, E.S’s playful sketch would have been axed in favour of something bold and boring. “Well”, Simon informs us, “I joined the business around 2013 when a slew of brands seemed eager to scrub away any sign of their past; dates were removed from logos, beautiful hand drawn italic fonts were ditched, and everything became monocolored. I just cannot see us ever doing that.”

And it is in that humility and respect for the past that Johnstons’ contemporary relevance is contained. They may be that sleepy Scottish tweedmill who were a tad out of place amongst the exotic wares and Victorian splendor of 1851’s Great Exhibition, but whilst many of their fellow exhibitors have succumbed to time and went out of business, they survived. And, what's more, they can say that they have done it properly.

The Secrets To Success Of A 224-year-old Knitwear Brand