In Live Twice’s filmic and vintage atmosphere concocted by Hui Designs, one becomes a willing accomplice to the nuanced tableau of social and gastronomic tête-à-tête.

Live Twice is a designer’s haven. The small bar, designed by Lim Siew Hui of Hui Designs for the Jigger & Pony Group, is a cozy cocoon of timber and mid-century modern furnishing. The illumination is atmospheric and beckoning. A gridded Japanese shoji screen framing the entrance transports patrons from the quaint streets of Bukit Pasoh to a sublime mise en scène that is not unlike a scene from a Wong Kar Wai film. 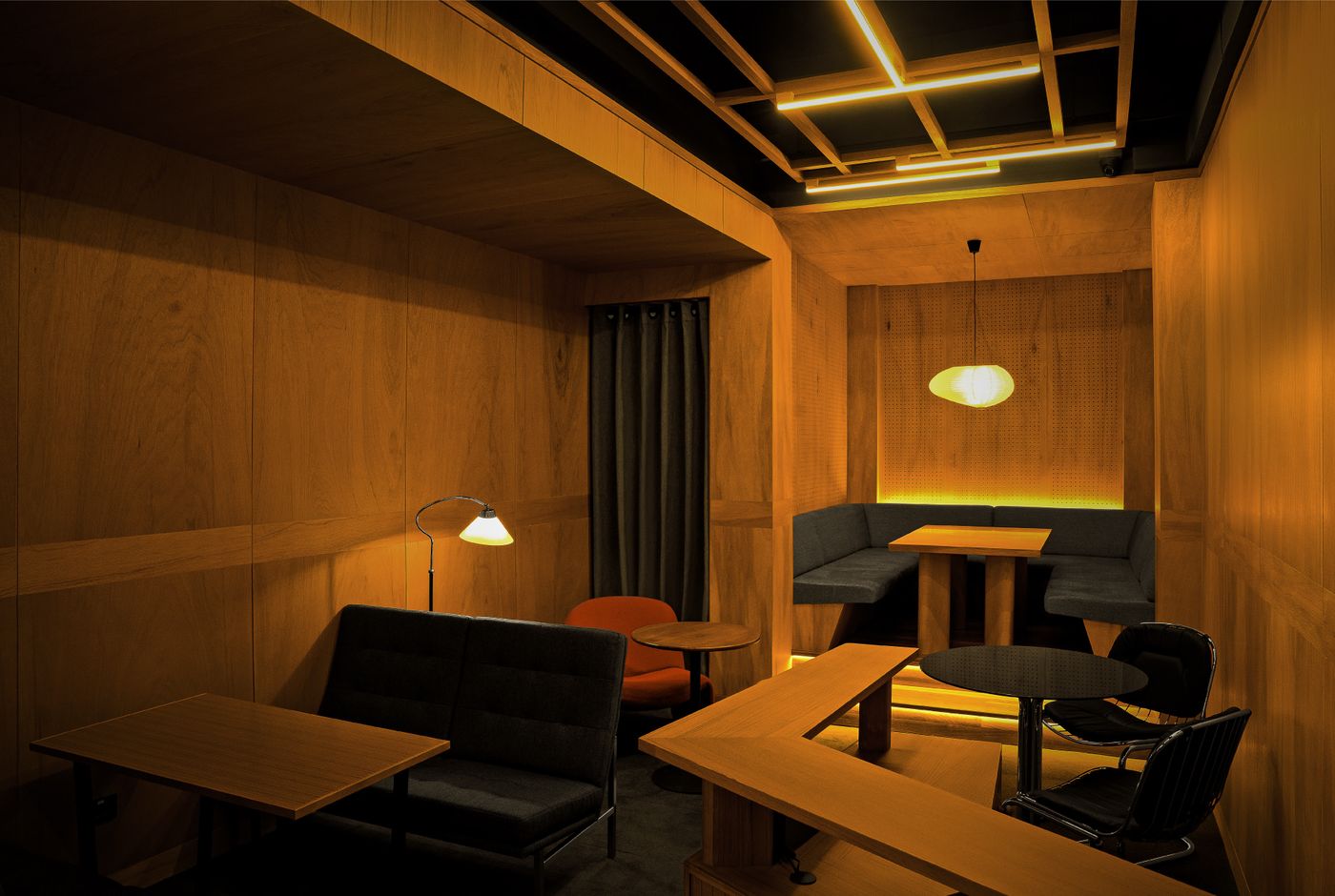 Thematically, there is nothing quite like Live Twice in Singapore. The space formerly housed The Flagship – another whiskey and cocktail bar by the same client but with a different concept. An admirer of the Japanese mid-century modern aesthetic, the client tasked the designer, who goes by the moniker Hui, to capture this spirit in the interior design. The style originated from the German Bauhaus, crossed into the International Style and was popularized by the likes of architects and designers such as Josef Eichler, Charles and Ray Eames, Eileen Gray, George Nelson, and Eero Saarinen. It was well-embraced by the Japanese who are drawn to its simplicity, fine craftsmanship, and natural materials — qualities that are inherent in their own culture.

The setting Hui created is as much the bar’s protagonist as the menu. It features cocktails with names like First Light — a concoction of Haku vodka, coffee flower distillate, brewed coffee, plum, juice and cascara — and a curated offering of yõshuku (Western- influenced snacks) comprising wasabi cheese terrine and pork sando (sandwiches). To make the long and narrow space cozy, Hui alternates alcoves with clusters of Bauhaus and mid-century modern classic furniture, casually placed like in a domestic setting. There are vintage Knoll tables, Giancarlo Piretti’s iconic Alky chairs, and 1970s-designed Falcon chairs by Sigurd Ressell. “I had images of Don Draper’s apartment from Mad Men and Dr No’s apartment in the Bond movie You Only Live Twice in my head,” says Hui of her inspirations. These movie references are fitting, for the bar is named after the latter, in which Nancy Sinatra sang “You only live twice, or so it seems; one for yourself, and one for your dreams”. An Isamu Noguchi-designed Akari light pendant anchors a niche carved into one end of the bar, its organic form chosen by Hui to soften the structured shell. Above, architectural light tubes mounted on a suspended timber trellis lend a graphic edge while accentuating the plan’s linearity. “The trellis is designed not just to hide [services] above it, but also to frame the space,” shares Hui.

She positions the main bar counter at the other extreme end, joined to an angular communal table to encourage interaction. “The bar counter works like a kitchen counter (in a home) where the bartender can engage (directly) with the customers,” says Hui. Above, mirrored panels slant downward to expand the sense of space while subtly reflecting the various happenings that play out like an unscripted movie. In the middle of the space, Hui inserts a secondary, compact bar counter. “I visualize a party of two sitting there casually on the high stools. I wanted to offer the patrons different types of seating to encourage different social behaviors,” she highlights.

(Related read: This ryokan-styled home is the zen you need) 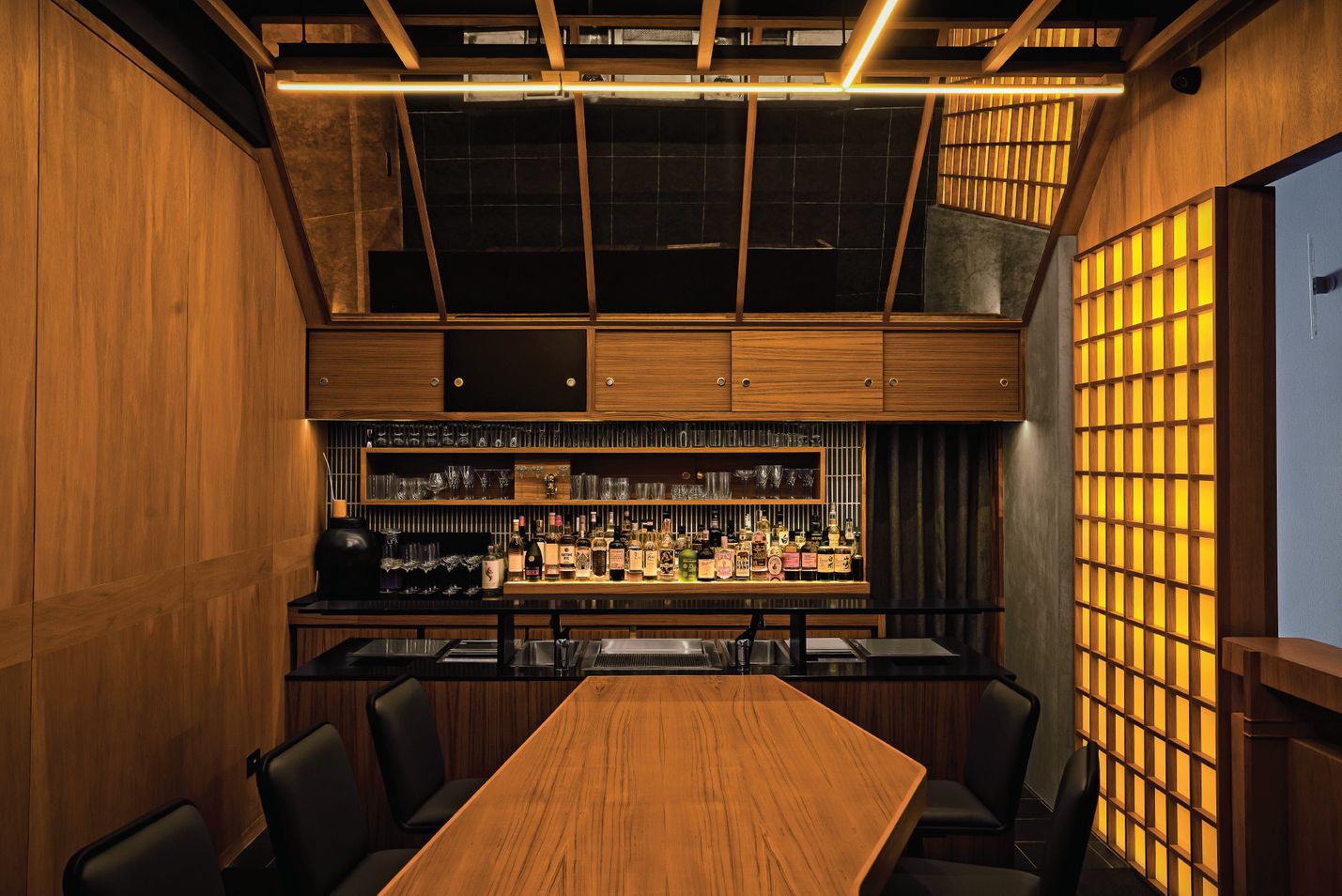 Hui’s keen understanding of user behavior and astute design sensibilities has birthed many distinct atmospheres that capture the cuisine’s concept without bordering on kitsch. Loco Group’s restaurants – Super Loco, Lucha Loco, and Chico Loco – feature utilitarian textures and jolts of colour to evoke the festivity of Mexican street food. The décor for The Privé Group’s bistros have soft, natural shades and wicker surfaces that conjure the breezy and botanical. Celebrated cocktail bar Jigger & Pony at Amara Hotel is modern-luxe with velvet, timber, and brass touches. At the same time, the trio of Merci Marcel Parisian cafes is infused with Mediterranean flavour courtesy of rattan elements and floral murals.

“I am an intuitive designer; I design by listening and then asking (endless) questions before the client and I agree on the concept and design,” Hui elaborates. The idea must draw from the site’s innate qualities, which is why you will find Hui spending much time on the ground even before putting an idea to paper. “It’s about getting a feel of the site, understanding the space, and listening to my instincts on what can work. I create with those feelings,” she articulates. In the example of Prive café at Wheelock, sitting with the client before the design process, she observed the throngs of passers-by and likened the experience to being in a Parisian café. This became the inspiration, and she faced a row of chairs outward for patrons “to watch the world go by”.

Loving the way interior design can completely shape dining encounters led her to specialize in the F&B sector since founding her one-person studio in 2014. The fact that many of these establishments have become so well recognized and beloved attests to her single-mindedness and creative strength. The Philippe Starck-designed AXOR Starck Nature Shower allows for a new showering experience — one that helps bring you closer to nature.

A Hästens Bed is the Stuff of Dreams

A Hästens Bed is the…

In celebrating 170 years of heritage, we talk to fifth-generation owner, Jan Ryde, on the new drēmər launch and Hästens' brand evolution.