Through a year-long collaboration with hotels under The House Collective group, Swiss artist Katja Loher demonstrates the interconnectedness of philosophy, sustainability, vision and craft

To reinforce the relationship between art and design and The House Collective, the group of hotels has launched its first art program, “Encounters Across Cultures,” with “Seeds of Life” as its theme for the year and Ms. Katja Loher as the program’s first featured artist.

The collaboration comprises four consecutive installations that will be showcased within The House Collective’s four properties — contemporary Chinese art in The Opposite House in Beijing, cross-disciplinary tastemakers in The Upper House in Hong Kong, fashion design in The Middle House in Shanghai, and Chinese traditional masters in The Temple House in Chengdu — “an initiative to break down barriers, celebrate collaboration and strengthen those ties with the artists communities in the cities in which we live,” according to Mr. Toby Smith, managing director of Swire Hotels, which manages The House Collective.

Bringing the four concepts to life is Ms. Loher, a Swiss multidisciplinary artist based in New York recognized for her style of video sculpture, which fuses video and object. “The idea is to free video from technology,” Ms. Loher explains. “Art is a language and I wanted to free the video from the device so you can enjoy it as an art form.” 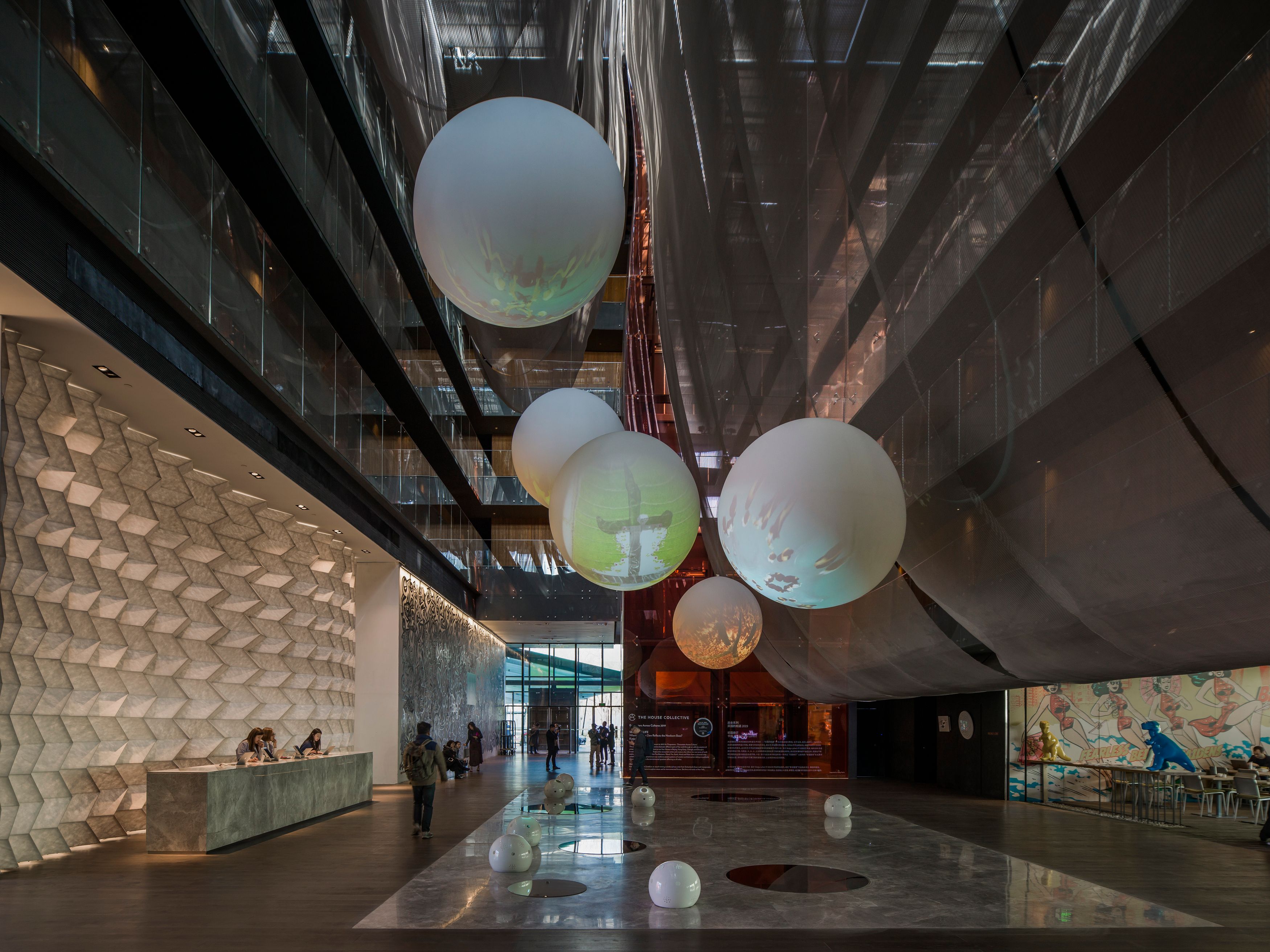 The Seeds of Life at The Opposite House, Beijing

We talked to Ms. Loher during the launch of “Encounters Across Cultures” in Beijing about the project and her philosophy as an artist.

What is the theme unifying all four installations?
Since the beginning of my art career, I’ve worked on the elements. In the West we have the concept of the four elements (earth, water, air and fire, proposed in Ancient Greece), so I was really excited to dive into the Five Elements theory, which is built upon metal, wood, water, fire and earth. It's an incredibly fascinating blueprint that affects so many different aspects of Chinese culture, and it's been a wonderful guide for me to create these works. I have decided in the installation to create five planets based on the five elements, and what is also interesting is how in this theory they're related to one another, so there's the cycle where the elements are in balance, and there's the cycle where the elements are out of balance. The videos you will see are inspired by those guidelines. Every choreography begins with the Chinese character representing that element, and then dancers move into an abstract choreography.

Why did you decide to take part in this project, and what drew you to The House Collective and the idea its properties wanted to convey?
I was excited about being an artist in residence, because that means a relationship with the house and the people who work here and the collaborations. We're collaborating with artists in each of the cities, so that allows me to work with the culture and interact with it. And being in the four cities allows me more time to travel on the subject and specifically work with the city itself. And I appreciate The House Collective, because it's not a hotel chain that's repeated in many cities, so every House is a nest in the city and has been designed in the cultural environment. The artist at The Opposite House, Beijing

Through the process of communicating with the various artists and hotels, what most impressed or fascinated you?
I think it’s the cultural openness, which I also felt when I came here in 2009 for six months. Arriving here as a Westerner, it's almost like we're being thrown in the deep end, because we can't talk or communicate and we need help in anything we do, and still I received a warm welcome. I felt that the openness of the local artists in welcoming an artist from abroad was really wonderful. And then the culture that I felt when I did studio visits: There's a view of the modern China that's growing so fast and can feel artificial, but meeting the artists [convinced me] culture and philosophy are still there. And it's also interesting because my topic is the Five Elements theory, which is not very present today in China, because what I understand is that it's not really part of education. But once you start talking about it, more and more it becomes part of the blueprint of Chinese culture.

What was the goal of the four installations when you were planning them? Was it to convey meaning, inspire or give the audience ideas on how to reflect on their past?
I would say there are many different aspects. The important underlying theme is the balance in nature, and that we live more sustainably and with Mother Earth and not against it, and using the elements, which are fundamental to the structure of everything in Chinese culture — food, medicine, architecture, martial arts, and more. And there’s the relationship between the elements through the generating and overcoming cycles, so if we start to mess around with the elements, everything starts to go out of balance. The artist visits The Temple of Heaven, Beijing

Would you say that is something new to what it means to be an artist now — more than just entertain and delight, there’s an added responsibility to educate?
I personally think art has to communicate. I think it's such a privilege that as an artist you can communicate. My artworks are my messengers and they travel around the world, and I've been meeting so many people who first meet my art before I meet them. Especially today, with what we’re facing — climate change and air pollution, especially in Asia; the sea level rise, which will come very soon; not having any more clean water; seeing the last of insects and pollinators and so many species — right now we can't be silent anymore, so I think art is a wonderful platform where we have a little more freedom to communicate, and I think it's crucial.

Tell us more about the title of the installation, "Where Will the Dew Reflect the Newborn Bees.”
The bee has had a central role as a symbol of the ecosystem. When the colony collapses, the death of bees, and insects in general, means we’re losing our pollinators, and we’ll have no pollination and crops and fruits and vegetables. It’s ignorant of us not to change our attitudes when we see the bees are dying. Another reason I work a lot with the bee in my art is that bees communicate by dancing: When they fly they can tell the hive members about the direction in which flowers are found, how far away they are and the quality of flowers. It’s incredible. Bees and other creatures have precise body language through dance, and my language in my work is dance. And there are other elements in my work too, such as video — we “write” letters through dancers and in post-production that becomes words and expressions, so that idea of communicating with the universe and building collaborations is also an important part of my art.

Has the bee always been one of the motifs in your artwork?
I think my first piece with the bee was in 2009, but I’ve also used butterflies, birds and ants. Treating the bees as a tribe communicates that every part of the ecosystem is equally important to make the whole cycle work, and that’s going back to the Five Elements theory that everything is interconnected and it needs one element to feed the next, and once we interfere with that, they destruct each other.

Does what you do feel like work, or do you not make that distinction?
I would say I don't, because work and art are one. There are moments of super hard work, when I need to get the job done, and because I travel sometimes, when I'm in New York, I'm literally locked in my studio, and I can't leave because of the time constraint, because it needs my presence to do the videos and video editing. But I love to have fun, even when it's a lot of work. I'm really enjoying it. so I think that's the privilege of being an artist — there's no separation between life and work, and it just becomes one manifestation. Mikimoto’s Yasuhiko Hashimoto talks to us about the new Marina Bay Sands boutique, personal style, and the jewellery he is most obsessed with.

Ms. Nita Chauhan of Vincitore shares how she stepped in the right direction to find success in the finicky world of the footwear industry 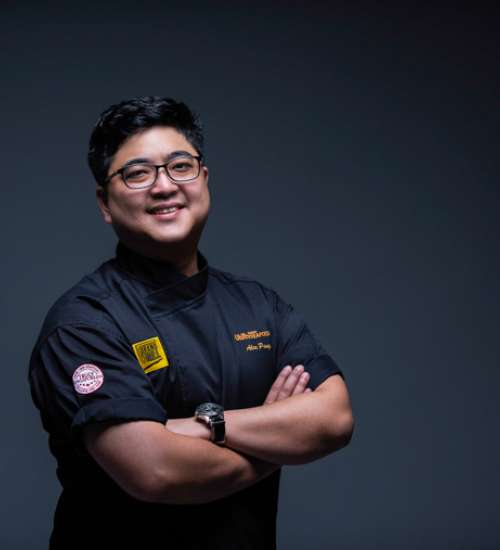 Mr. Alexander Pang, second-generation chef and CEO of beloved tze char institution, New Ubin Seafood, is responsible for taking it to the next level with the opening…

For Mr. Scot Toon, Managing Director for Asia of The Pavilions Hotels and Resorts, the secret to a truly luxurious travel experience is allowing the property and…