Known for its popularity among artists and cultural heavyweights, the iconic Lutetia – Paris’ only Left Bank grand hotel – has been skilfully overhauled to be at the cutting edge of modernity, while losing none of its Art Nouveau and Art Deco heritage

When the Hôtel Lutetia officially reopened last July, after having closed its doors in 2014 for a €200 million facelift, it was a resplendent reincarnation of its former self that carried with it memories of the countless luminaries who have stayed there. The story goes that on 28 December 1910, the crème de la crème of Parisian high society turned up at the corner of Boulevard Raspail and Rue de Sèvres to toast the opening of the Lutetia, the first luxury hotel on the Left Bank, with a magnificent buffet during the day and a dinner and dance in the evening. Its location overlooking Le Bon Marché was chosen because the founders of Paris’ first department store, the Boucicaut family, were searching for a place to lodge customers and suppliers. A reflection of the store, the modern, elegant hotel was entirely forward-looking when it came to function and style, boasting the most advanced luxuries at the time: hot water, telephones for calling reception, air conditioning and rolling shutters operated from inside the room. It was built by Henri Tauzin and Louis-Hippolyte Boileau, son of Louis-Charles Boileau who was the architect of Le Bon Marché, using innovative processes and materials for the period: concrete, glass and hot-riveted steel pillar foundations engineered by Gustave Eiffel (father of the Eiffel Tower completed in 1889). 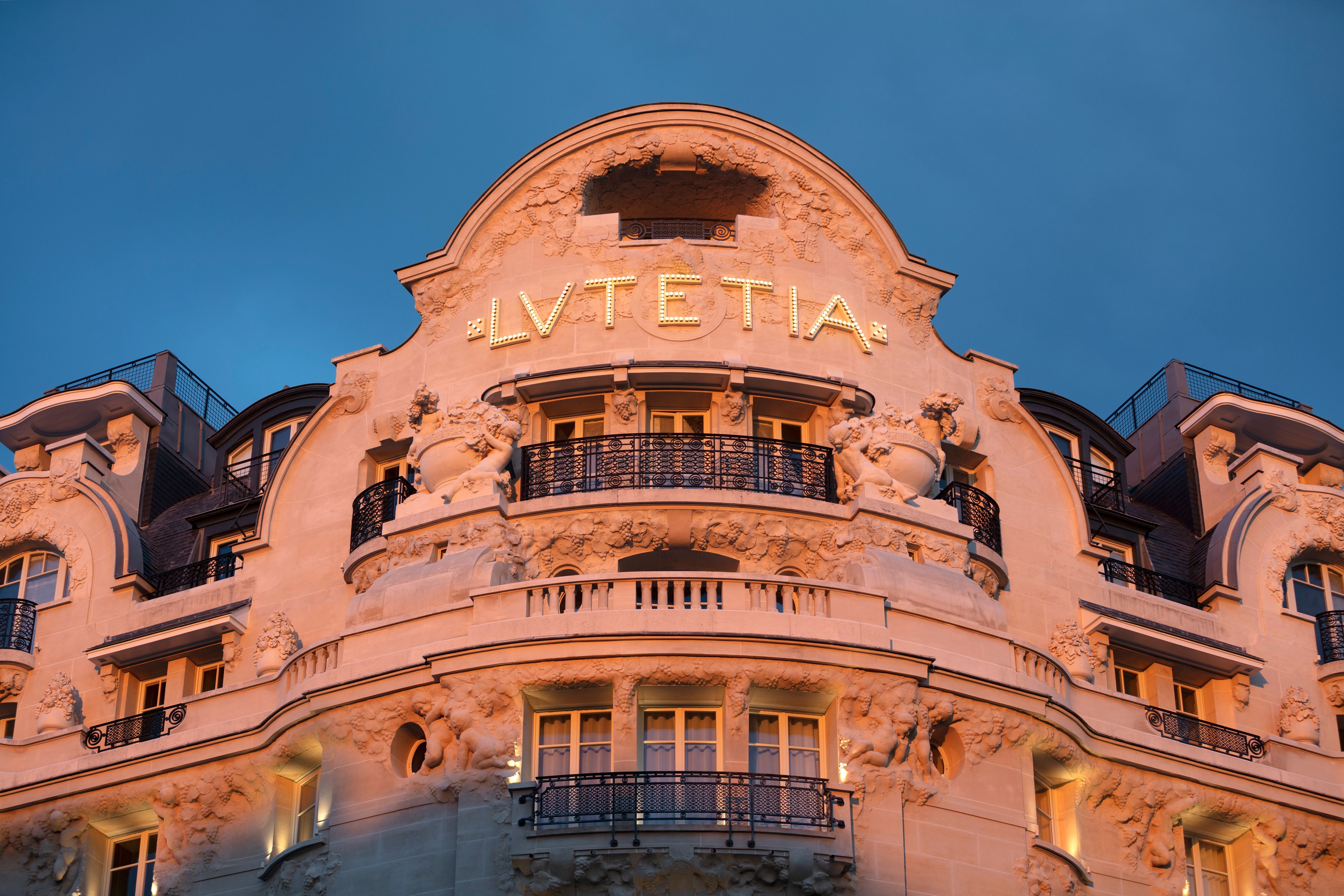 A monument to Art Nouveau and Art Deco, the Lutetia’s never-before-seen, undulating façade (today listed) was inspired by the naturalist trend of the era, while the most respected artisans in silver, fine china and crystal participated in the interior design, and the furnishings came from Le Bon Marché. Everything was designed to highlight the excellence of craftsmanship and sublimate the spaces. The hotel rapidly became a hotspot among personalities from the worlds of literature, art, cinema, music, fashion and politics. A gathering place for writers and even providing the setting for their books, Antoine de Saint-Exupéry, author of The Little Prince, and his wife Consuelo stayed at the hotel. For the American expatriates of the Lost Generation, Paris was a party city with loose morals that was free from prohibition. Russian writers found inspiration and a way of life there. Located near the district’s bookshops, community halls and fabled cafés (Les Deux Magots, Flore, Lipp, etc.), the Lutetia welcomed literary award ceremonies and cultural events.

It was a melting pot of German anti-fascists, provincial businessmen, trade unionists and theatre performers. Charles and Yvonne de Gaulle chose it for their wedding night, Nikita Khrushchev, George Pompidou, François Mitterrand and Jacques Chirac were regulars, and peace treaties were signed there. During WWII, the hotel was requisitioned by the Germans just like all of the capital’s main venues, but in 1945, it took in survivors of the Nazi concentration camps before their families came to bring them home. A plaque on the façade guarantees that this period will never be forgotten. Jean Cocteau, Albert Camus, Jean-Paul Sartre, James Joyce, Samuel Beckett, Ernest Hemingway, Joséphine Baker, Serge Gainsbourg, Isabelle Huppert, Catherine Deneuve, David Lynch and Brad Pitt are just some of the illustrious guests the Lutetia has welcomed. Artists also made their mark there, with Pablo Picasso, Henri Matisse, Arman, Philippe Hiquily and Vassilakis Takis having added to the hotel’s fame. French sculptor César conceived his own suite there and fashion designer Sonia Rykiel carried out the first renovation works starting in the 1970s. When the hotel shut in 2014 for its latest overhaul, it housed approximately 280 listed artworks

French architect Jean-Michel Wilmotte was tasked by current owners The Set Hotels (the hotel was previously controlled by Taittinger and Starwood) with the facelift while acknowledging the Lutetia’s unique past, with the help of Perrot & Richard, specialists in the restoration and safeguarding of heritage. “We discovered impressive ornamentation work on the windows, cornices and balusters,” he notes. “Truly extraordinary. But the interior was substantially altered: successive stages of refurbishment, and especially a stratification of initiatives by architects, interior designers and decorators had caused it to lose its personality.” Therefore, the building’s layout was entirely reworked, the number of rooms over the hotel’s seven floors cut from 233 to 184 to create space for 47 ultra-luxurious suites including seven signature suites (every room had to be torn down and remodelled), and the hotel brought up to par in terms of “palace” standards (an official French government rating for hotels that are considered better than five star), current regulations, energy efficiency and wastewater recycling. Wilmotte explains, “The challenge facing us was to breathe new life into an establishment while respecting its roots, identity and personality. We uncovered part of the history and reinvented the rest.” Working like archaeologists, incredible frescoes hidden under dozens of layers of paint were unearthed and revived. In the lobby, friezes and bas-reliefs were rediscovered and highlighted. Almost 17,000 work hours were required to refurbish Adrien Karbowsky’s concealed fresco in the Bar Joséphine paying tribute to the garden of the Abbaye-aux-Bois convent, on the remains of which the Lutetia was built, with its depictions of harvesting, fruit picking, hunting and animals. Collaborating with some 100 companies, Wilmotte called on experts in the renovation of stained-glass elements, decorative paintings, mosaics and sculptures. “These frescoes, these patinas bring out traces from the past that had died out,” he discloses. “In other words, we have cleaned up everything that was out of memory and highlighted everything that conveyed some of it.” For example, a historical overlapping circle motif on the façade typical of the Art Deco period has now been replicated in the bathrooms, on the wall sconces in the guestrooms and by the shadows projected by the light fixtures. As the Lutetia was previously the only Parisian grand hotel without a garden – a prerequisite for a hotel of that level of prestige – Wilmotte carved out an interior courtyard patio at its heart to allow more daylight in and eliminated one of the existing windowless grand salons. Seriously damaged by previous refurbishments that had transformed its original two floors into a single one, the Brasserie (which opened just two months ago) – today led by French chef Gérald Passedat known for his Mediterranean-style cuisine, who has held three Michelin stars since 2008 for his mythical restaurant in Marseille – is once again spread over two levels and the central double-height ceiling of the 1910 edifice has been restored. The Salon Saint-Germain’s iconic glass roof has been transformed by French contemporary artist Fabrice Hyber into a colourful, dreamlike painting portraying his polymorphic vision of mankind. As 1910 was an era of transatlantic cruises on opulent ocean liners, a strong wood theme can be seen throughout the property to recreate the atmosphere. We find eucalyptus wood varnished like a Riva yacht, Calacatta marble and bronze fixtures. From the furniture, lighting and floor treatments to door handles and washbasins, every element is bespoke and was produced exclusively for the Lutetia. Blue and raw silk or beige-grey shades reign in the contemporary guestrooms decorated with 1930s-inspired, Art Deco-style furniture designed by Wilmotte and specially created by Poltrona Frau, while the 700-sqm spa bathed in natural light features a 17-metre-long pool surrounded by marble walls and floors, Lalique vases and works by haute couture textile artist duo, Céline Alexandre. Wilmotte concludes, “There is the full history of the place, built over more than a century, and then, there is a second layer of history that overlaps the first one, from the ’60s and ’70s, when the hotel was the HQ for artists, the place where they would spend the night – their second home. Artists and fashion designers alike. We are trying to resuscitate all that. I believe that people from the neighbourhood will easily get accustomed to their favourite address again; tourists will discover something genuinely new; the dream of the Lutetia will start again.” It seems that with this renaissance masterminded by Wilmotte, the hotel is well on its way to being a hit once again among the city’s creatives.