With Kuala Lumpur’s constantly expanding urban sprawl and perennially jammed roads, it’s no wonder that KL-ites have been escaping to Janda Baik in Pahang on weekends to get away. A half-hour drive from the city, the sleepy hilly town is known for lush greenery, cooler climes and picturesque waterfalls. Weekend houses and boutique resorts are common, but affluent city folks have been buying up land to build private retreats in the last decade or so. The large estates run the gamut from modernist glass-and-steel fantasies to vernacular timber extravaganzas. Mr. Melvyn Joachim Kanny, founder of MJKanny Architect, proposed a design that celebrated the site’s context. “A middle-age couple approached us to propose two houses on two one-acre plots; one was intended as their holiday-cum-retirement home while the other was either for investment or their children. Both units were to be of a similar concept yet differing in terms of spatial usage. 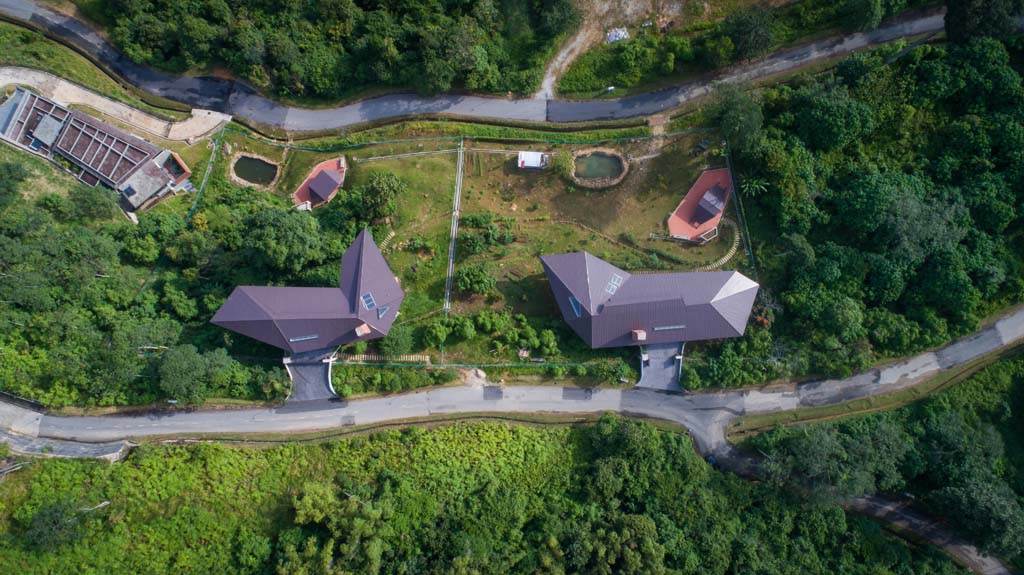 The site, attractive yet challenging, sits on a steep slope with a commanding view of Genting Hills. “The form was inspired by the captivating landscape of Janda Baik – with jagged hills and outcrops reflected in the final built form that is in itself natural and organic. All the interior spaces have different spatial characteristics, and no room has 90-degree corners. Each space was designed to capture a view of its immediate natural environment, and all effort was taken to blur the distinction between inside and out.” The house was built on sustainable principles; Mr. Kanny explains that he deliberately chose natural materials such as concrete and brick, and raw finishes like unpainted plastered walls. He balanced these with the client’s taste and requirements of wanting a home that was cosy and welcoming, so some stone and timber was also used to soften the rugged, unfinished look. “I think the final outcome is a delicate balance. The principle has always been to try and use local, natural materials. Even the natural bricks came from a nearby factory. Bamboo that was cut during site clearing was re-used as outdoor lamp posts and shower stand in the master bathroom,” explains Mr. Kanny. Although the client didn’t specify a ‘green’ house, the architect worked a sustainable ethos into the design. Mr. Kanny capitalized on the normal cool temperature of Janda Baik to reduce the need for air-conditioning. He maximized openings to encourage air to move freely throughout the house, and installed high-level motorized windows for hot air to escape. He created a wind tunnel almost by accident. “A lift shaft was provided according to the client’s brief, but the lift will only be installed in the future if needed. He converted the shaft into a wind chimney, capturing the cool mountain breeze and forcing it down into the internal spaces – a concept popular in the Middle Eastern countries. This later became a prominent design feature of the house,” enthuses Mr. Kanny. Other passive design strategies include extensive use of local natural materials, reduction of chemicals/VOCs like paint, building air gaps between two layers of brick walls to cool the inner walls, and collecting rainwater and natural ground water to a pond at the bottom of the site for re-use. 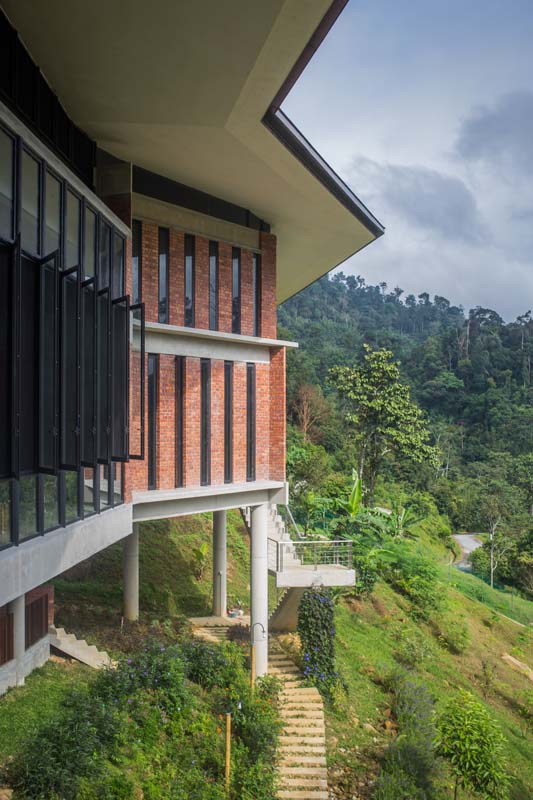 The roof features exaggerated overhangs on the eastern and western sides to reduce direct sunlight. While the oversized roof has undeniable advantages, it was the most challenging and complex architectural detail. “The roof is a  three-dimensional structure with falls in three directions; we wanted it to hover over the house, so we used frameless glass between the roof, the walls and structure below, which was challenging to get right. There was no plaster or painting on the structure, which meant making any mistake in the setting-out almost impossible to rectify,” recalls Mr. Kanny. “We coordinated with the engineer to make the structure work, especially with the extra-large roof overhangs. The structure has mostly exposed ceilings that engineering and architecture must work hand-in-glove to achieve the seamless look. The contractor was very helpful in trying to build according to our details as the house has very complex angles on both the floor plate and the elevations.” A scale model was built beforehand in order to comprehend how the final form would look like, and this helped in planning the construction. “Kudos to the contractor for realizing the roof exactly as we envisioned it.” One of the two houses was submitted to the Malaysian Institute of Architect’s PAM Awards 2018 under the residential category. “The interior fit-outs are still a work in progress; the client is rather particular and is taking her time to choose the furnishings,” reveals Mr. Kanny. However, things are already at full speed on the grounds with the client growing organic avocadoes, Musang King durians and olives trees. As the landscape matures, the building has already reaped fruits for Mr. Kanny and his team –the gold medal from the aforementioned award. Mr. Kanny is justifiably happy that his work has been recognized by the industry, but seems more pleased that the clients are enjoying the house he designed: “It is very difficult to strike a balance between the client’s needs and the architect’s vision of the house. Sometimes the architect needs to back off on certain issues that the client feels strongly about that may go against the architects design aesthetics. Ultimately, there is always a solution that both parties can live with, and finding that makes the journey challenging and worthwhile.”