Profile of the month: Edward Tan

For Mr. Edward Tan, Executive Director of the Hong Seh Group, understanding the past and knowing the importance of change ensures that he is on the right course – whether on land or out at sea

It was admittedly a terrible day for a photo shoot out at sea – the winds were picking up and dark clouds were forming in the distance. As we made our way from the ONE ̊15 Marina waiting lounge to the shoot location, it started to drizzle. But what could we do? Weather be damned, the show must go on! 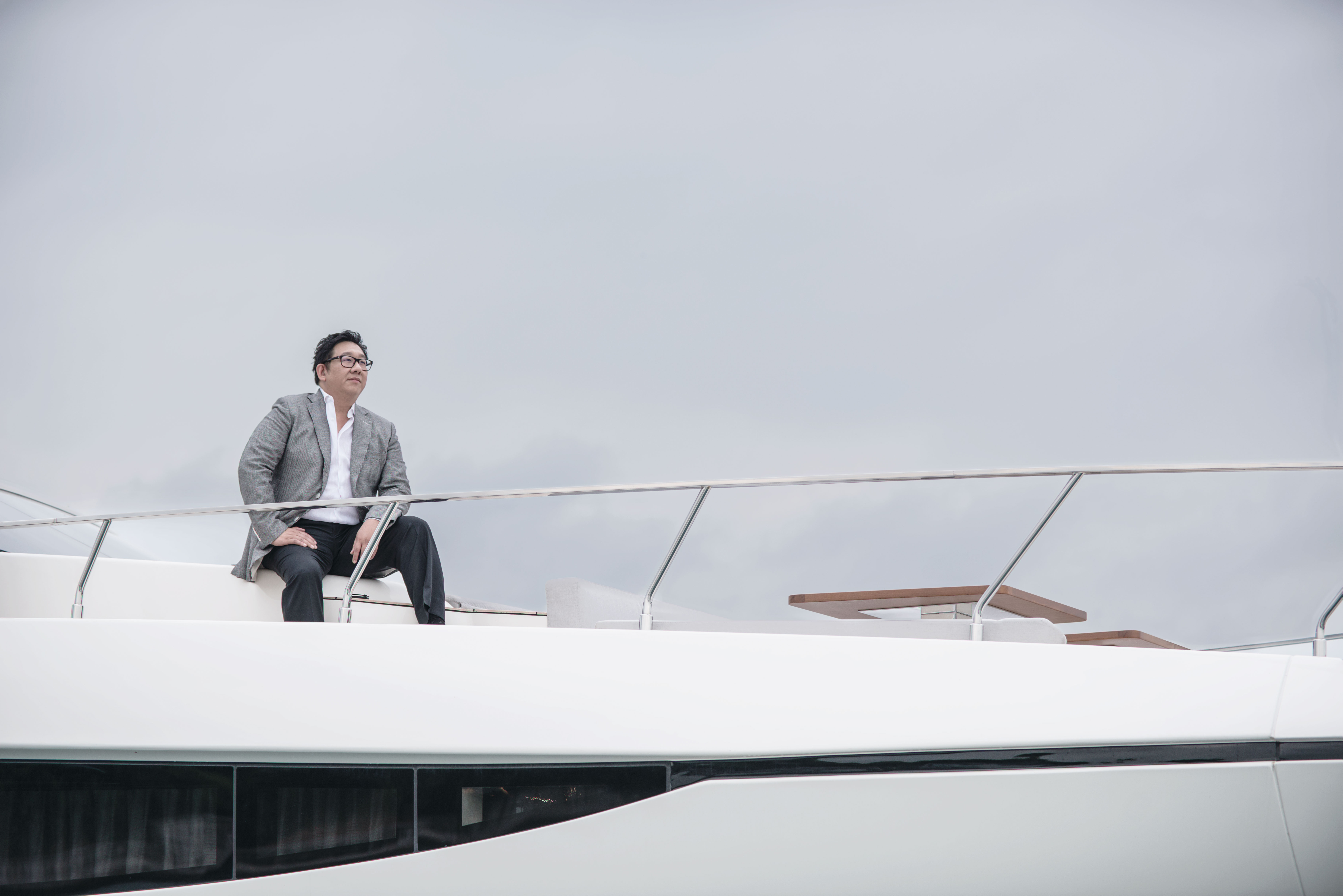 As the Portfolio team boarded The Ferretti 920, our cover subject, Mr. Edward Tan, Executive Director of the Hong Seh Group, seemed unfazed by the ominous weather. Perhaps there were more pressing matters on his mind, especially since the Singapore Yacht Show 2019 just wrapped up the week before. In fact, the beautiful yacht we were on was one of the stars of the show.

“As per the past years, the Singapore Yacht Show was great because we had the chance to meet more people, not just from Singapore, but also from around the region. The market is more mature now, with more people opening up to the idea of yacht ownership and longer-term charters. These days, people are starting to enjoy the better things in life and are willing to consider a four to five-day charter in different parts of the world.”

Mr. Tan also shared that they have been seeing a lot more Singaporeans warm up to the idea of owning a yacht, not just for traveling, but also for spending communal family time together. More often than not, when you are onboard a yacht, you are in a communal space where you will have to communicate with the people on board, ditching technology, and putting away mobile devices as often as possible because there probably wouldn’t be an Internet connection. “This is an interesting trend that has been growing, where yachting can actually promote family bonding time.”

Taking Control of the Land Before Conquering the Seas 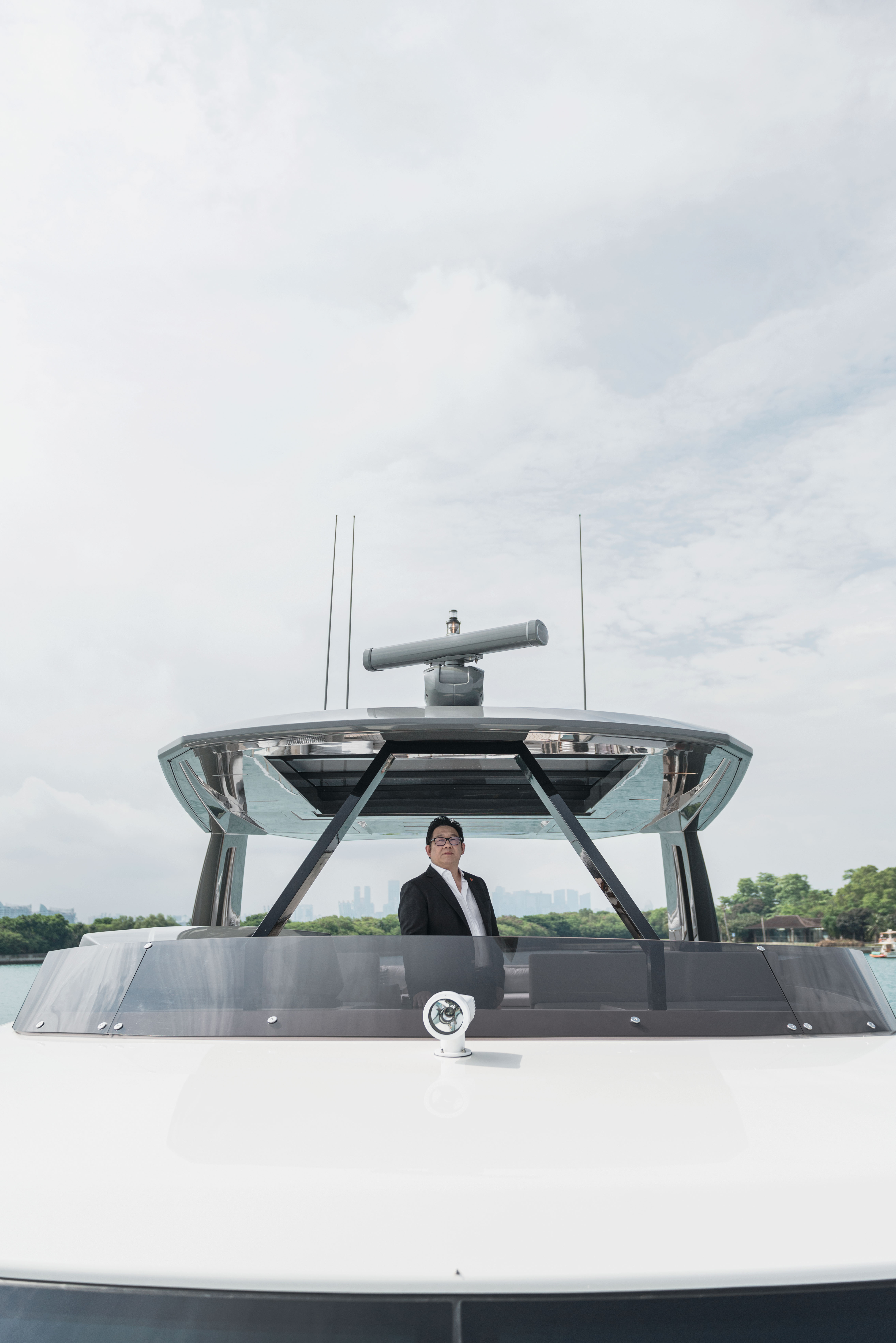 Way before Hong Seh set its eyes on conquering the open seas with its impressive roster of luxury yacht brands, there was Hong Seh Motors – a trusted name in Singapore’s growing automotive industry that specialized in exotic supercars. It further made a name for itself in 1986 as the official distributor for Ferrari.

In recalling the earliest memory of the company: “Trying to sell a Ferrari car was an arduous task, because there are a lot of people you needed to talk to. It is a specialized and exotic product that practically nobody knew much about then.

“At most, a Ferrari was known as that little red car that cost more than an apartment. It was definitely not easy and I witnessed my father (Mr. Alfred Tan) putting in a lot of effort to try to sell one car.

“From that time, all while meeting new people, we forged and built a long-lasting impression and relationships because of the time spent getting to know our customers until they bought their first car from us.”

Being fully aware that being a part of this niche industry was no walk in the park, Mr. Tan had no hesitations fearlessly diving head first into the business. “As the only child, I knew I had to help contribute and find a way to feed myself and the family.

“My parents allowed me to choose what I wanted to do, but I thought I owed it to them to find a way to contribute to the family and make things work. Somehow, joining the family business was the right thing to do.”

Beyond the exotic allure of Ferraris and Maseratis, the recent introduction of the Tesla brand to Hong Seh’s portfolio was a timely one, especially at a time where people are becoming more conscious of how their carbon footprint impacts the environment. Mr. Tan said, “As one of the pioneers of electric cars, people are definitely curious about Tesla and its products.

“Personally, I feel that Tesla is a very unique brand and product. I love the performance of their cars and it is a fantastic form of electrifying transportation. It drives superbly and definitely represents a different form of getting from point A to B.”

Adding Tesla to Hong Seh Motors’ roster of car brands is one thing, but convincing their clients to consider it is another. “As people become more aware and conscious in making an effort to reduce carbon footprint, there is definitely more opportunities within the electric automotive segment.

“Switching from combustion to electric makes perfect sense, as operational costs per kilometer is lowered due to the price of per liter of fuel versus electric current. That said, we also want to take this opportunity to announce that we are in a working partnership with Geely Geometry to bring affordable electric transportation to Southeast Asia, as well as Australia and New Zealand. 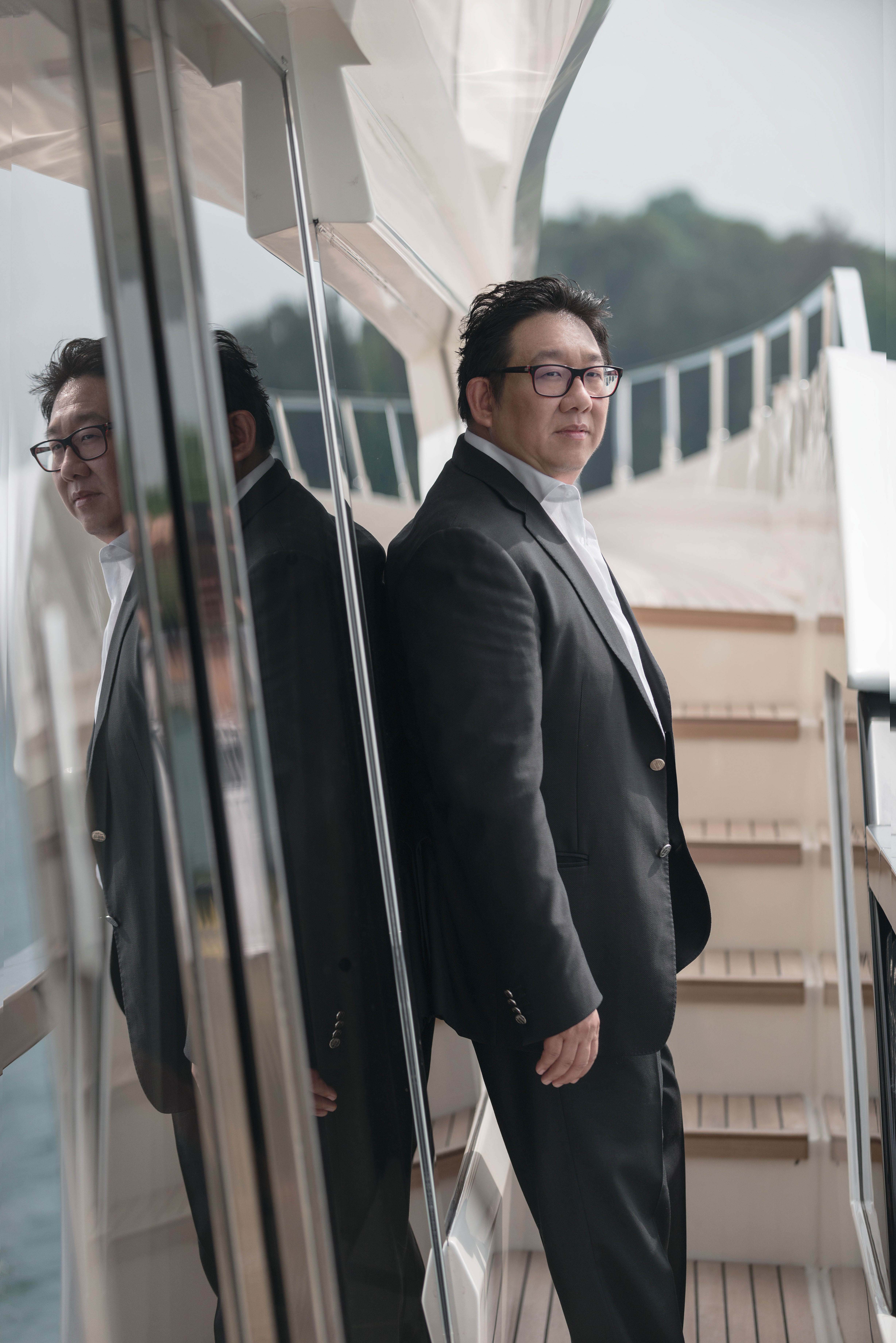 Hong Seh Motors clearly knows what automobile fans want, but how did the company decide to take on the high seas with the establishment of Hong Seh Marine over a decade ago?

“While we were doing Ferrari and Maserati cars, we established a good pool of customers. Hence, we decided to extend the business and product offerings. At that time, there were very few local companies in the luxury yacht segment.”

Hong Seh capitalized on the opening of the prestigious ONE°15 Marina back in 2007, where the interest for bigger, more luxurious yachts grew.

“When we set up Hong Seh Marine, we wanted to ensure that we provided our customers with a holistic service and experience – from when they purchase the yacht to when they embark on their exploration journeys on their yacht; from maintenance, to their captain, and right down to the crew. We wanted to be part of their journey in which they learn how to better use their yacht for self-enjoyment.

“With a similar mindset to the automotive business, we pride ourselves in providing an end-to-end relationship. Also important to note is that it need not strictly be a local customer. For example, it can be a customer in Europe who wants to purchase a yacht and we are confident in our ability to handle that since we are well versed in their needs and wants.”

Mr. Tan also revealed an interesting industry insight: “People often say that the happiest days of owning a yacht is the first and last day of the yacht ownership. The first day is when you collect your brand-new yacht and the second one is when you have sold your yacht.

“However, we want to debunk that saying and help our customers look forward to their second special day, not because they have sold their yacht, but because they are looking forward to the next yacht they’ll own, as well as the new adventures that come with it.”

For those familiar with the Hong Seh name, you will know that the business spans several generations and dates all the way back to 1936 when the company was established and known as Chop Hong Seh.

With Mr. Tan currently steering the ship, he shared some important insights that he learned from the two previous generations. “Change is the only constant and we need to learn to adapt to our surroundings.

“With the world changing over the days and years, we need to know how and when to be humble because this attitude will allow us to learn new things every day. From the initial days of chandelling to chemicals, paint oxides, plastics, to automotive, and now marine, our product lines have changed and will continue to change over time due to various challenges and demands along the way. Today, we have found our strength in distributing and servicing luxury clients and products, which will remain as our core offering.”

Driving his point closer to home, he uses the automotive industry as an example. “Taking into consideration how technology has moved engines from combustion to hybrid and now electrification, it is a clear sign that we need to evolve and improve with the times.

“The new generation might also feel there isn’t a need to purchase and own a car, especially since there are options to rent or lease it. There is also the change of utilization and payment.

“In the past, ownership was a pride and joy, especially if you make a comparison to home ownership. But today, with new thoughts, patterns, and practices, the course of utilization and usage has become so different.

“The world is ever changing and who knows what the future will bring. But I know one thing is for sure: I will do the best I can and it will always be in the best interest of the business and our customers.” 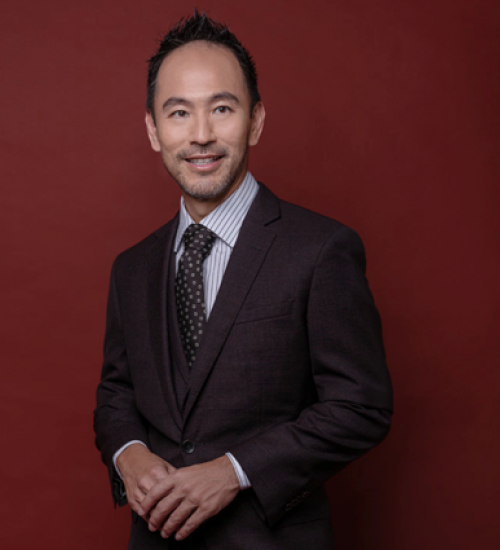 Running at His Own Pace

Running at His Own Pace

One might assume that success came easy for someone like Ong Tze Boon, but he reveals that it was anything but. It took a lot of personal sacrifice, determination,… 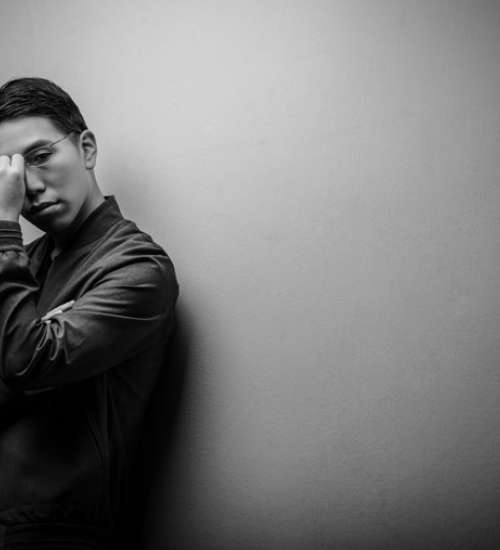 Eric Leong, Managing Director and co-founder of Mlion Corporation and winner of EY Entrepreneur of the Year 2020 - Industrial Solutions, is on a mission to reinvigorate… Kenneth Goi, COO and Executive Director of GSH Corporation, looks back on important life lessons that allow him to forge on with confidence 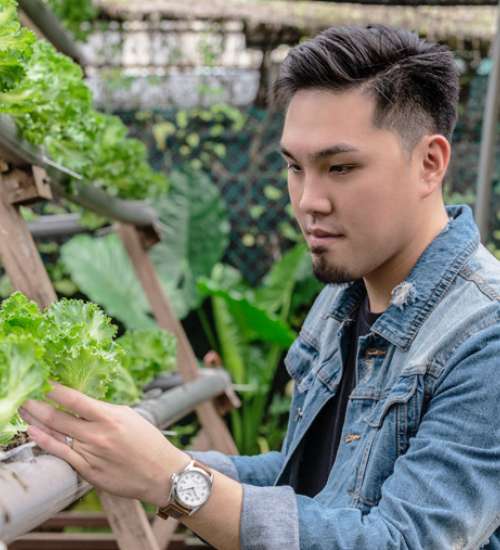 Profile Of The Month: Edward Tan