On the Road with Oon Jin Teik

Oon Jin Teik is a very busy man that when the rare occasion to join him for a ride came up, we didn’t have to think about it twice “I’m gonna take you to my special place,” Jin Teik told me chirpily. We were cruising along ECP on a bright morning, in a handsome Mercury Gray Mica Lexus ES. He wouldn’t say much about the ‘special place’, only that he discovered it while on “Dad duty” – sending his second son to Hendon Camp where he did his National Service.

As CEO of the Singapore Sports Hub, Jin Teik ensures that the complex works like a well-oiled machine, that its facilities are pulling in the crowd, that the vicinity is pristine, safe and attractive. To his credit, the Sports Hub has been meeting its KPIs since he took over the running of the complex.

From ECP, we turned into Tanah Merah Coast Road, then on to Aviation Park Road, and Changi Coast Road, towards Changi Beach Park. The roads were empty save for occasional dump trucks; we could’ve easily done 140kph, but Jin Teik kept to a steady 80kph, clearly relishing our leisurely ride.

Along the way he told me stories about his sons – one an athlete, the other a musician, his heady days at the LA Olympics, his life as a student abroad. “I enjoy driving along this road,” he changed the subject as the sea came into view. “You can’t tell we’re still in Singapore; look at that,” he said gesturing to the boundless space. After years living in the US, Jin Teik has developed a hankering for long, scenic drives.

In school, Jin Teik made the swim team. “We trained with our school coach who imparted all the knowledge he had about swimming, some of which were borrowed from physics, the subject he taught,” he recalls with unmasked wonderment. His dedication to the sport sent him to the Singapore Olympic squad. It was another time and place when he represented Singapore in the 1984 LA Olympics.

Training didn’t always benefit from modern sports medicine or sport physiology; athletes traveled with their teams instead of an entourage, ‘no guts, no glory’ still rang true.

As a student in the US, and later as an employee, Jin Teik traveled around in a car. “My second job at DuPont was in sales, but before DuPont allowed you to drive a company car, they put you through hours of defensive driving. I had to go to a circuit and drive at the fastest speed like an F1 driver.”

On his first training day, the instructor kept egging him to go faster. “I’ve never heard anyone telling me that I was going too slow until then. Suddenly, he stuck his foot out and stepped on the accelerator, sending the car literally flying. He then abruptly applied the handbrake and ordered me to control the car.”

He learned the importance of being in control of the vehicle that day. “That stayed with me,” he said, “until today my fundamental requirement is safety.”

When he and his family moved to Shanghai, where he ran an MNC, a chauffeured company car took him around. He began to miss driving. On his return to Singapore, he immediately set out to buy a car. “I’d driven Toyotas all my life; I wasn’t sure if I wanted to change. So, I went to Borneo Motors, and in the showroom were both a Toyota and a Lexus. I tried the Lexus GS250 and instantly fell in love with
it.” It was to be his first, but definitely not his last Lexus.

Jin Teik bought the demo model. “It fits my personality, I guess. I’m quite conservative – from the standpoint of choosing a vehicle. I don’t go for flashy cars, or flashy colors. My requirement is, firstly, safety. I ferry my family around – safety is paramount.

He views safety as a system that is to be assessed in its entirety. “When you drive a car, you’re operating machinery; all parts should work together to deliver the performance. There’s no point talking about individual features,” he explained.

“Today, Jin Teik is a very satisfied owner of an all-new 7th generation Lexus ES. “The ES’s performance, in terms of user adaptation, is ideal. You know that it can be safe, but the hazards sometimes are other drivers, and so you need the ability to maneuver and control a car to get you out of tight spots. The best way to sum it up would be Lexus is designed in such a way that it molds you into the vehicle. I find comfort in the security it offers.”

The new ES is equipped with the latest Lexus Safety System+, designed to protect drivers, passengers, people in other vehicles on the road and pedestrians, ensuring maximum
peace of mind.

Its Blind Spot Monitor detects nearby vehicles to help drivers when changing lanes; its Intuitive Parking Assist has sensors that detect surrounding objects, and notify the driver of their location and proximity. Its Rear Cross-Traffic Alert helps when backing out of a parking space.

Four high-resolution cameras mounted on the front, sides and rear of the vehicle provide a bird’s-eye view of the immediate environment. Moving View and See-Through View options create a composite image of the vehicle’s surroundings as on-screen guides assist with parking and tight maneuvering.

In addition to maintaining a constant speed, Dynamic Radar Cruise Control uses the radar and camera sensors to detect a vehicle moving ahead and maintain an appropriate distance between vehicles.

Its LED taillamps last longer and illuminate faster, allowing drivers behind more time to react to the brake lamps. In the event of a rear-end collision, the Whiplash Injury Lessening front seatbacks will push backward to deflect and absorb energy from a rear-end collision. 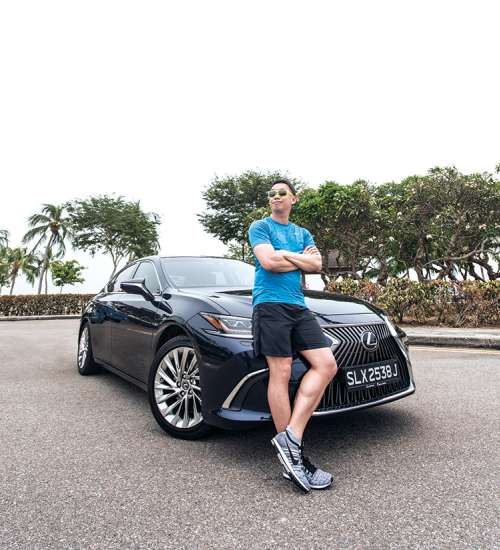 On The Road With Gordon…

For Head of Asia Research at Arisaig Partners Mr. Gordon Yeo, the bucolic Dempsey Hill neighborhood is an ideal spot to spend quality time with his young family

On The Road With Dr. Francis Goh

On The Road With Dr. Francis…

To CEO and founder of Hehsed Consulting, Dr. Francis Goh, the idyll of Sentosa provides a welcome respite from the rigors of running a business

On The Road With Oon Jin Teik