From its aggressive looks to its powerful engine, the 2018 Harley-Davidson CVO Street Glide has all the hallmarks of a true blue road champion

Harley-Davidson is a name synonymous with motorcycles. After all, it can be argued that if it weren’t for the iconic brand, motorized two-wheeled transportation might look a lot different. For instance, it was Harley-Davidson that first introduced its revolutionary V-type, 2-cylinder engine to the industry. The patented 45° angled engine is an engineering tradeoff that allows a large, high-torque engine to be put into a relatively small space. The design also causes the cylinders to fire at uneven intervals and that produces the gurgling  "potato-potato" sound so often linked to the Harley-Davidson brand. Harley-Davidson was one of only two American motorcycle manufacturers to survive the Great Depression. Since its beginning, at the start of the previous century, the company has seen many ups and downs. Today, the motorcycle giant is experiencing resurgence with more and more of its motorcycles being sold around the world than ever before. One such motorbike that is turning heads is the company’s newly revamped 2018 CVO Street Glide. Make no mistake this big; impressive bike is pure Harley-Davidson—all the way from its aggressive looks to the engine that powers this bike down the highway. The Harley-Davidson CVO Street Glide features long tour comfort combined with unbridled power that will satisfy your soul.

In Harley-Davidson parlance the ‘CVO’ in the bike’s moniker stands for Custom Vehicle Operations. These models tend to stay a few steps ahead of Harley’s basic offerings.  Not surprisingly, there were a few upgrades over last year’s model. 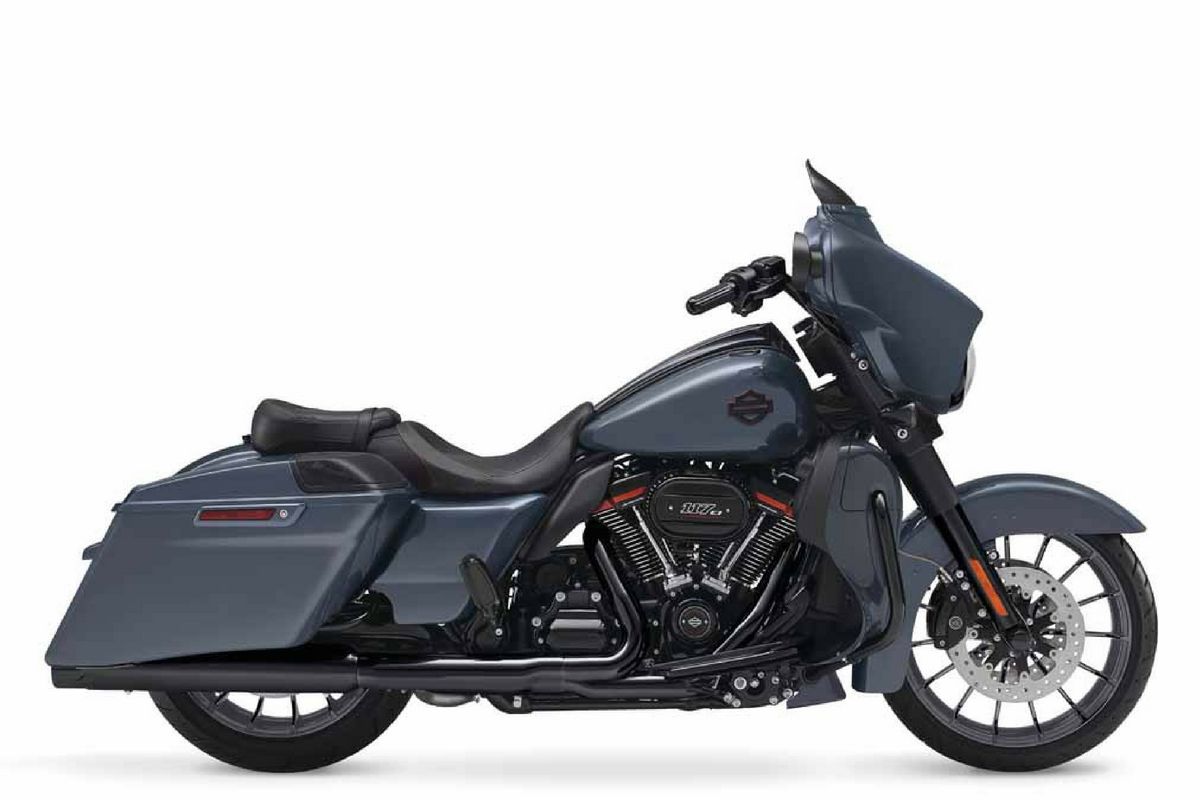 For this year’s model the stroke has remained the same at 114.3mm; however, the bore has increased to 103.6mm (4.1 in) in diameter for a larger displacement of 1917cc – a 49cc boost. While you might think that 49cc isn’t that much, it’s significant enough to make the CVO Street Glide’s engine the biggest production engine the company has ever made. Another difference is a feature that was removed. Now, instead of a water-cooled engine, Harley has switched to an oil-cooled one. Gone are the thick radiators that were housed in the lower areas of the bike.

The big Milwaukee-Eight 117 engine’s nameplate is blazoned across the air cleaner, quietly letting everyone know this is Harley Davidson’s biggest engine. And since it’s a semi custom bike, the engine comes in a variety of finishes: crinkle, gloss black, chrome, while the headers get a what Harley calls a “Smoked Satin Chrome” heat resistant coating. It’s a metal treatment the company says is used on coating jet engine parts and should not experience degradation over time. The bike also comes in a limited selection of sexy but subdued custom shades, which helps separated it from ‘normal’ production Harleys. As mentioned, Harleys have always had distinctive exhaust sound. Many may remember that back in 1994, the company filed a sound trademark application. Not surprisingly, Harley-Davidson’s competitors opposed the filing. Many rivals had sought to imitate the Harley sound with clever pipe acoustics. Harley thought this was unfair. However, after years of litigation Harley-Davidson dropped efforts in 2000 to register the sound of a Harley as a trademark—probably because sound is so subjective. Still, if it’s sound you want, this CVO Street Glide has more than just the sound of its headers screaming down the highway.

The new Harley Street Glide comes with the Boom! Box 6.5GT Infotainment System. And it now has an additional set of speakers installed where the previous radiators had been. New speakers aren’t all that’s new about the Boom! System. The twin amplifiers now pulse out 900 total watts of pure music power. The bike’s audio components put to shame many of today’s living room theater systems. 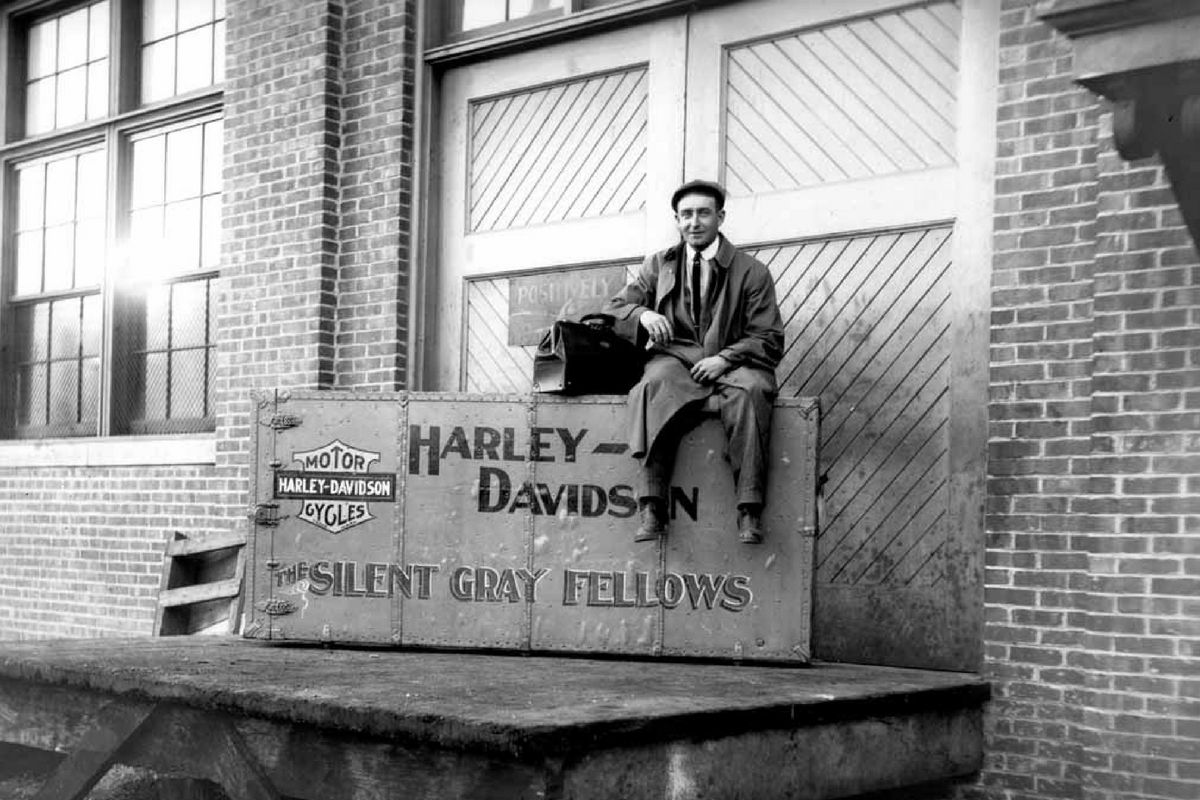 Harley-Davidson has designed the CVO Street Glide to attract attention, on purpose. So, don’t expect CVO Street Glide owners to ride down the street without pumping up their sound system. Out on the open road, the CVO’s  sound system easily overcomes highway noise even when cruising along at a cool 100 kilometers per hour. Some may enjoy the wall of sound while others might just find it a bit jarring over a long drive. After all, one of the greatest things about a motorcycle is the feel of the road, sound of the engine and the great views afforded by uncovered transport.

Like most new cars today, included with the bike is a modern hands-free fob that turns on and off a security system as you leave or approach the bike. The bike also offers port for USB connections. And for riders who want to communicate with passengers and other riders, or take phone calls, the 2018 CVO Street Glide comes with a Harley-specific accessory Bluetooth helmet communicator that’s based on the Sena 20S EVO. Harley’s big, beautiful Milwaukee-Eight 117 can be both a purring kitten and a thundering beast. Around town, other than a heavy clutch pull, the engine is easy to manage. The electronic fuel injection is flawless—delivering the right amount of fuel perfectly while cruising or twisting the throttle open. The six-speed transmission shifts smoothly when short shifting or even when hammering through a series of high-rpm up-shifts.

The fork lowers on the new Street Glide have the same Smoked Satin Chrome treatment as the exhaust. The suspension hasn’t changed since last year’s major upgrades making the handling pretty much identical. The Street Glide’s ride is comfortable but not super soft. While it is a big bike, it’s no boat. The bike skips over minor road imperfections yet remains firm enough to give the rider road feedback. Still, you’ve got to be careful with this bike. It it’s easy to crank up the speed and glide over the speed limit with total ignorance…the ride is that good.

Of course, if you’ve got everything this bike makes sense. It’s the perfect companion to all the other toys found in your stable of iron horses. However, the CVO Street Glide doesn’t come cheap, the MSRP is an eye-watering $95,000 in Singapore, excluding COE. Only the buyer can decide if the power, presence, prestige and ride are worth it for this beautiful beast of a motorcycle.